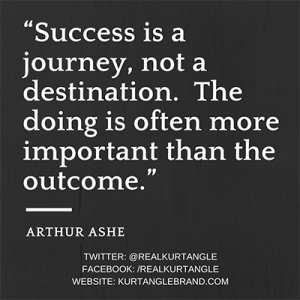 We all have goals and dreams, some of us pursue them, some of us do not, and many of us start to go after them and then never see them through.

At one point in my life, I did the latter. I quit wrestling in 1994. The reason? I couldn’t make the top spot in my weight class for the USA Team and I didn’t think that I would make the team…EVER…so I quit.

I sat at home for 3 months and felt sorry for myself. I didn’t know what I wanted to do, but someone kept tugging on my heartstrings. It was GOD. He was telling me that I wasn’t finished with what I started. I began to feel guilty for not seeing it through.

It was then that promised myself that I would go back and give it everything that I had, even more than before, and if I didn’t succeed and make the team, at least I tried and I saw it through to the end. The rest is history, I won a World Championship in 1995 and Olympic Gold in 1996. After I won, I thought to myself, “Was it worth it, even if I had lost?”. Yes! As long as I knew in my heart that I gave my best, then nothing else mattered, not even the Gold Medal. It was more important to be true to myself by pursuing my goals and dreams with 100% of my ability. And even if I hadn’t achieved them, I had the satisfaction of seeing it through to the end, and I could live with that.

So if you don’t think you’re good enough to succeed at whatever it is, see it through and give your very best, that’s the most important thing. And if you do, you might surprise yourself. I did. It’s damn true!