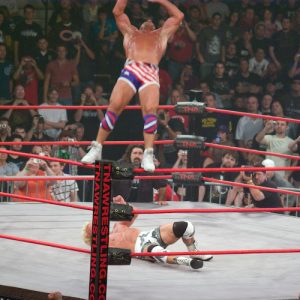 There have been shots fired about whether pro wrestling is real or fake. Big names like Dana White and Conor McGregor have given their opinions on the subject, and they have that right. But PLEASE understand that in the wrestling business, things can be a bit complicated.

Yes, some things are pre-determined. And yes, at times it is choreographed. But it’s far from fake. When you watch an action movie and see stunt men doing the stunts, would you consider that fake? No, you wouldn’t. Some stunts have cost stunt men their lives. It’s the same with wrestling.

I used to be on the same side as Dana and Conor, until I became a pro wrestler. It’s the toughest thing I’ve ever done, and I won a gold medal with a broken freakin’ neck. My body has been beaten up over the years. Why? Because the stunts are very real. We wrestle and bump on plywood. It’s NOT a bed mattress. It’s PLYWOOD. So if you want to comment on how fake wrestling is, then I challenge you to get into the ring and take 5 bumps. That’s all – 5 bumps.

The first day I tried pro wrestling, I took 3 bumps and quit. I said, “F*ck that! You have to be a real idiot to do this.” Maybe we are. But we love to perform for our loyal fans. John Cena is a great example. He’s been the top guy for 10-12 years because he is a beast. A badass. Now, would I put him in UFC against one of their top fighters? Hell no. Cena is not a fighter. In reality, he would most likely get crushed in 20 seconds. But the fact that he has endured being on top for so long in pro wrestling makes him a badass.

UFC isn’t for everyone, and neither is pro wrestling. You need to be a badass to do both, but in very different ways. I trained in MMA and Olympic Wrestling for years. The training is insane. But performing In front of thousands of people, while taking bumps and getting thrown over the top rope (or doing a moonsault from the top rope) definitely makes you a badass in another way, because you’re heaping unparalleled abuse on your body. So PLEASE know what you’re talking about before you make a stupid comment. Brock Lesnar, Ken Shamrock and yours truly have dabbled in both MMA and pro wrestling and our comments remain the same. That wrestling is without a doubt the toughest thing we’ve ever done. So Conor and Dana, I welcome you to get in the ring with me and show me what you’re made of. I guarantee that you will quit long before I do. And that, my friend, is damn true!! It’s damn real!!