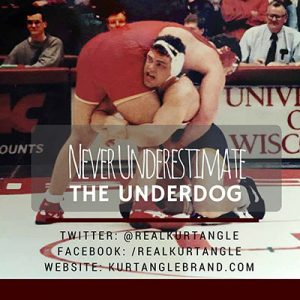 Do you sometimes feel like you’re under appreciated? That you’re overlooked? That others don’t think you will amount to anything? That you’re the underdog? Most of us have felt this at some point in our lives.

When I was in high school, I was an incredible athlete. I was all state in football and a junior national champion in wrestling. I thought my future was very bright. I honestly thought every college in the country would offer me a scholarship, but they didn’t! I didn’t know why most of the larger colleges wouldn’t even take a glance at me. So, I decided to go to a small school named Clarion University.

I absolutely loved the school and the wrestling program, but part of me wondered why I wasn’t good enough to be accepted at Penn State, or Iowa, or Oklahoma State. It hurt my feelings and started to affect my self esteem. I couldn’t understand why no one felt that I was good enough to go to the “powerhouses”. Don’t get me wrong, Clarion was a tremendous wrestling college, but I felt like I wasn’t quite the blue chipper that I thought that I was.

Something deep inside of me decided not to put my tail between my legs. I decided then and there that I was going to prove to everyone, that I was good enough to go ANYWHERE. So the journey began. I felt that the only way to prove myself was to simply beat every wrestler in my weight class in the whole country! I wanted to stick their poor decision of not recruiting me up their ASSES…and I did! I won 2 division 1 NCAA championships and was runner up as well in college. And to really stick it up their ass, I won a world title in 1995 and an Olympic Gold Medal in 1996. I proved myself to be one of the greatest amateur wrestlers of all time. And guess what? I didn’t need to go to Iowa or Penn State. I proved I could achieve my ultimate goal ANYWHERE.

Sometimes I look back and think about the coaches that didn’t recruit me. Do they kick themselves for not recruiting me? Whether they do or not, I know they regret their decision and that’s good enough for me.

So if you ever feel like the underdog or you feel underrated or unappreciated, prove to the world you’re worthy of something great. I guarantee that somebody out there will notice, and say “I never thought in a million years he/she would be that good”. Make your life count and stick it up their ass! You’ll feel like a true Champion. It’s damn true.