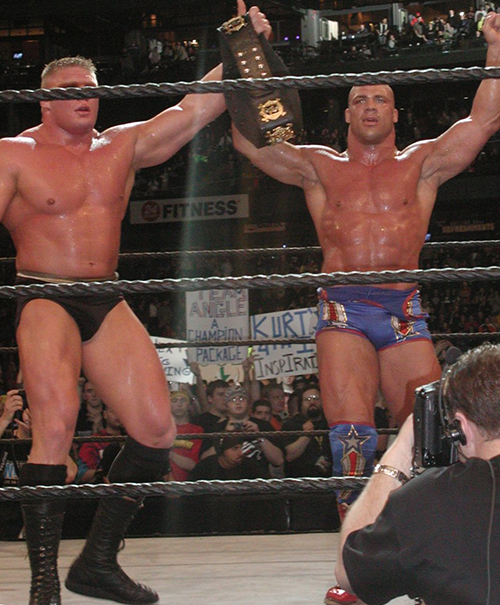 I always listen to my fans.  When a fan explains to me why he/she thinks they know my best matches ever, I listen.  In Anthony Verdin’s opinion (Kurt Angle’s biggest fan), here are my 20 best matches in WWE and TNA:*

If you’re looking for 4.5-5 star matches that have everything, the best technique, lots of action and psychology, look no further.  They’re right here… check them out if you can!

3) Angle vs Chris Benoit– Rumble 2003: A technical masterpiece and perhaps the best match ever.

4) Angle vs Lesnar– Wrestlemania 2003: Two of the best athletes Period!!

5) Angle vs Lesnar– Smackdown 1 hour Ironman Match: This match is even better!

6) Angle vs Guerrerro–  Wrestlemania 2004: The technique and psychology are off the charts!

8) Angle vs Undertaker– No Way Out 2006: Could be both of their best matches ever.

9) Angle vs Orton vs Mysterio– Wrestlemania 2006: An introduction to “Suplex City.”  Very entertaining-watch and see.

10) Angle vs Ken Anderson-Steel Cage Lockdown 2010: An amazing match. In my opinion the greatest cage match off all time. The storytelling was amazing. It was the culmination of a feud that started in February. Everything just clicked. The spots. The violence. The finish using the dog tags which is what started the feud in the first place. The moonsault. The drama. Easily a 5 star match and I would say a top 5 match in Kurt’s career, period.

11) Angle vs Samoa Joe-Title vs Career- Cage Match Lockdown 2008: Amazing blend of styles. This is a total package match. The build was amazing. It took a good 15 minutes from the time the feud video started to the entrances before the bell rang. This is a match that changed the landscape. At a time when MMA was white hot, this match blended MMA and pro wrestling into a thrilling encounter filled with submission counters, hard strikes, and a memorable moment. This has been called the second best match in TNA history.  I give it 5 stars.

12) Angle vs Jeff Jarrett-Genesis 2009: The real life tension between Kurt and Jarrett turned was a highlight in both of their careers. In my opinion, this match is Jarret’s best ever and one of Kurt’s also. What really put this match over the top is the amount of emotion and HATRED. You can see it in both of the competitor’s eyes and it shows in a very physical match. There are many back and forth near- falls and sick spots/bumps, including both Kurt and Jarrett going through a table off the stage onto the CONCRETE. The finish is also great as Jarrett looks to have this match won until Angle uses his LAST bit of energy to reverse the move into his own pin and sneak away with the victory.

13) Angle vs Desmond Wolfe-3 Degrees of Pain-Final Resolution 2009: This match features psychology and storytelling at its finest which has become a lost art in 2015. Every fall built off the last. The selling and working of each other’s injured limbs was a thing of beauty. Add to it the fact that the second fall was a submission wrestling fan’s dream with a dramatic finish. This easily gets 5 stars.

14) Angle vs Aj Styles-TNA Title-Genesis 2010: In my opinion, this is the best match Kurt had against AJ. It was billed as the match to prove who was the best wrestler in the world and built off of all of the other matches they had together.  It was super and even had a few stalemates in it. The finish came when Flair screwed Angle and Styles turned, heel shocking everyone.

15) Angle vs Abyss-Falls Count Anywhere-Turning Point 2008: Abyss’s best match and a very underrated match. I saw a post on a forum saying this was TNA’s match of the year 2008 and it likened the storytelling to an old horror film of the 80s. Basically Abyss was Jason and Kurt was the victim, trying to mad throw anything in his way to slow the monster down (including a fan!) Kurt did everything he could to try to put Abyss away including a HUGE summersault off the stage, spearing Abyss THROUGH the stage but Abyss kept coming. The look on Kurts face “you gotta be kidding me” is priceless and the last few minutes have amazing near-falls and a dramatic finish.

16) Angle vs AJ Styles– Last Man Standing-Hard Justice 2008: Wow.  What an amazing match. The storytelling was on point and the falls were dramatic. The only thing keeping this from a full 5 stars (although I should re-watch) is that TNA went the wacky rules and had the pin before the count, which killed the flow a tad bit.  It also could’ve used some blood, but other than that it was incredible and pushed AJ up to a new level of legitimacy. I give it 4.5 stars.

17) Angle vs Samoa Jo– Genesis 2006: The first showdown was incredible. The atmosphere was OFF THE CHARTS and the finishing minutes were nail biting. The only draw-back is the match was under 14 minutes. Great stuff!

18) Angle vs Hardy– No Surrender 2010: This match is amazing. Everything clicked and it’s basically the perfect match–Except for one thing: the finish.  Two overtime periods, then a no contest for a small cut? Wow. This may have been the best TNA match ever up until that point, but this finish was bad. They should have just had a 30 min draw, and it would have been perfect.  As is, it is the best singles match of Jeff Hardy’s career.

19) Angle vs Lashley– TNA Title 2015: Wow. What a great match- a dream match actually. The story was the veteran Angle going for one last title run against the bigger, stronger, and younger champion. Everything was great and there is so much to love about this match. My only complaint is I wish it had a few more minutes to flesh things out a bit better, but that’s a small gripe.

20) Angle vs EC3– TNA World Title 2015: The psychology was off the chart in this match. Angle dominated, but the younger EC3 pulled off the upset.