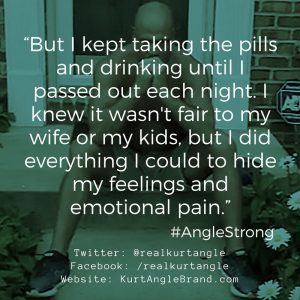 Have you, or anyone you cared about, submitted into the hands of addiction? Addiction to alcohol? Painkillers? Benzos? Or all of the above? I have.

My addiction started when I was prescribed painkillers for a neck injury in 2003. I didn’t know how powerful the opiate drug was until I found myself taking an insurmountable amount of Vicodin. To be exact, I was taking 65 extra strength Vicodin per day. I started taking one pill a day, and before long kept doubling the dose over and over again. I loved the feeling it gave me, because it allowed me not to feel anything.

Let’s go back to a time before I fell victim to this disease. Growing up, I experienced many tragedies in my life, but I never grieved because I was on a mission to etch my legacy in stone in amateur wrestling. There was nothing I wanted more than to make my family proud, especially those I had lost in the past. My father died in a construction accident when I was 16. That’s the day I vowed I would do something great for my dad. I promised that nothing would stop me from winning a gold medal. I went to college and was preparing for my first NCAA Division 1 title when my grandma, my only living grandparent, died of a heart attack the day before my big event. I had spent every weekend with her growing up and we were very close. She was special to me. I knew that I had to put on my game face and win the title for her and my dad, and I had NO time to grieve for them. I know that they would have been proud of me win or lose, as long as I gave my very best. I did that, and I was so happy that I didn’t disappoint them.

Move ahead 5 years, and I was finally where I wanted to be. I was #1 on the USA freestyle wrestling team and had won numerous national titles and a world championship in 1995. I was “on par” to see my dream become reality. Then it happened again. My coach and mentor of team Foxcatcher, Dave Schultz, was shot and killed by the club owner, John DuPont. This was six months before the Olympic games.

To make matters worse, three months later I broke my neck at the U.S. open. I was told I couldn’t compete anymore, and my life crashed before my eyes. But with lots of prayer, determination and a great doctor, I was able to wrestle at the Olympic trials. The doctor used a very risky but clever method. He would inject 12 shots of Novocain into my neck right before each match. It worked, and I found myself on the Olympic team. I would need the injections to continue on my Olympic journey, so we did it, even though I was risking paralysis. You may think I’m stupid, but I think anybody who had the chance of winning Olympic gold would have done the same. I won gold, and found myself in a position where I enjoyed the competition so much that I needed to match that feeling again.

What now? I knew I didn’t want to make the Olympic journey again so I took a stab at pro wrestling. In 1999, I signed with WWE, and by the end of that year I was on WWE television and doing incredibly well. I had found my new love, professional wrestling. But it was almost taken away from me, AGAIN, when I broke my neck again in 2003. I had surgery and was put on pain medication. That was the beginning of my dark journey.

The pills made me feel invincible and kept me in the game, until my sister Le’Anne died of a heroin overdose, not long after my surgery. I didn’t want to feel pain, or anything. I had not grieved for my father, my grandmother, my coach or my sister, and I wasn’t about to begin. At least not with the success I was having in WWE. I felt like everything was being taken away from me.

So I started taking more and more Vicodin, stuffing the pain deep inside of me. Before I knew it, I was knee deep (more like shoulder deep) into my addiction. I was hiding it from WWE, and at that time they weren’t drug testing for medication like they do now. I then broke my neck 2 more times over the next 2 years, and the bad relationship/marriage I was in made me feel more alone than ever. I decided that I could not handle the rigorous schedule of WWE and I felt guilty about being a liability to Vince McMahon. So I asked for my release and I swore I’d get my life together.

After I went to TNA, I was taking a lower dose of medication but I didn’t entirely quit. I started drinking alcohol excessively and went through a bad divorce. Eventually, I found the true love of my life, my wife Giovanna. But I kept taking the pills and drinking until I passed out each night. I knew it wasn’t fair to my wife or my kids, but I did everything I could to hide my feelings and emotional pain.

I had a successful career with TNA as I did in WWE, but I ruined any good reputation I had by receiving 4 DUIs in 5 years. I knew I had to do something to save my life and my marriage, so I checked into rehab and I’ve been clean and sober for over 3 years.

I’ve witnessed my mother suffer and die from cancer (leukemia) and my brother David go to jail for admitting to killing his wife while he was high on drugs. But I’ve dealt with those issues sober. I have allowed myself to experience true emotional and physical pain, even from the past. It’s not easy, but it’s the right way to live life. I’ve salvaged what could have been a tragic story, and I’m writing my own story on how the rest of my life will pan out. I thank God that I didn’t mess up my liver due to the medication I inhaled. (I just had a physical and everything is good). I love my wife and kids too much to go back to the drugs, and I am worthy of enjoying what I accomplished in my life. I want to be there to help my kids and make sure they never make the mistakes I’ve made. I love my life, I love my family and I love my fans.

God saved my life and he put me here to help others pull themselves out of the pit of addiction. #AngleStrong “will” save lives. If you or anyone you know has a problem with addiction, look for the #AngleStrong Program to assist your loved ones. Follow me on Twitter at @realkurtangle. I will do my very best to help anyone who is suffering from this horrible disease. It’s true.