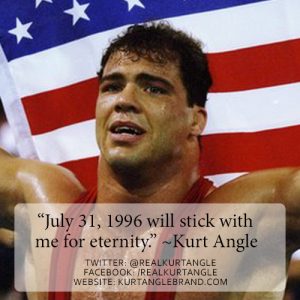 On Sunday, July 31, it will be exactly 20 years since I had the rare privilege of representing my country in the Olympic Games. It was beyond a dream come true.

Back then, I found myself battling a person known to be perhaps the best wrestler on the planet. He was, as I was, a former world champion in freestyle wrestling. It was a battle of two of the best in the 220-pound weight class. Abbas Jadidi vs Kurt Angle. Very few people thought I had a shot at beating him.

Jadidi was leading in the Olympics after beating Leri Khebolov, a 7-time world and Olympic champion, 8-1. In the Olympic freestyle wrestling circle, that score is a complete ass-whooping. Was I concerned? No. I knew that if I wrestled in my style I could win. What was my plan? Getting Jadidi exhausted. And I did. We were tied 1-1 when the bell sounded. We then wrestled 3 more minutes in overtime. It was close, and either of us could have claimed the title. But in the last 30 seconds I hit my trademark move, the low single, and took him down. We were still in a stalemate position when time expired. I thought I had scored and won 2-1. But the judges didn’t award me the point.

So we waited. And waited. And waited. It seemed like an eternity. When the judges decided the winner, the referee stood between Jadidi and I. Both of us were expecting the ref to raise our hands. Jadidi raised his own arm, and my world collapsed. I had lost. I knew I wouldn’t be satisfied with second place, so I thought “four more years of training 10 hours a day. Four more years of torture and focus and stress”. Then, in an instant, the ref put Jadidi’s arm down and raised mine. The rest is history. I was now one of the elite who had won both a world championship and Olympic Gold. I could finally breathe and relax. It was such a euphoric feeling, to think back to the 6-year-old by from Pittsburgh who dreamed of standing on the Olympic podium, and realize the dream had come true.

I thanked my Lord Jesus Christ and thought of my dad, my grandmother and my mentor Dave Schultz, all of whom passed away prior to the Olympics. Then I looked for my mom. I saw her in the stands crying, and I cried (I’m actually crying while I write this). I made my mom so proud. Who would have thought I would win this prestigious title? I was an ordinary kid growing up, but became extraordinary because of hard work and a family’s incredible passion for this sport.

I look back now and it’s all a blur. But it was incredible. Becoming the best in the world and sacrificing so much for that moment. It defined me. Thank you, Lord, for that amazing moment. I thank God, my country, my mom and dad, my brothers and sister and the rest of my family. I thank my coaches and especially Dave Schultz.

Twenty years later, July 31, 1996 is still fresh in my mind and will stick with me for eternity. That moment is who I am and what I stand for. So to all of you reading this, make your dreams a reality. It’s worth every second you sacrifice. And you, too, will celebrate the moment of victory as I do each and every year, no matter what your dream is. It’s true.