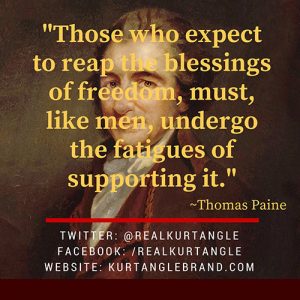 We are soon going to be a part of the most important democratic process in our country; electing the next President of the United States in November. Some of us care but many of us don’t. We should all care who the next President is going to be. Why? Only because that person will guide our country for the next four years, and that has me and plenty of other people concerned.

Participating in the election process is imperative for all of us who enjoy living in a free country. It sets the tone of our country for the next generation. I’m concerned about how my children’s lives will be when I’m no longer here. The news is filled with stories about threats and potential threats from ISIS, Iran, and North Korea, and some people believe our current President has tried to brush off the activities of those groups and countries. Unemployment numbers might be dropping, but some people point to the fact that better employment rates come from more part-time employees being added to the workforce. If that’s the case, those part-time jobs aren’t enough for people to live on.

There are many things happening now that could look horrifying for our future generations. One thing we can do to change things is vote in November elections. Who we elect as President affects not just our country, but the whole world. Whether you believe it or not, the US is the world leader in just about every category. The world relies on our support. So this election is about a lot more than who we pick to lead our country, it’s also about who our leader will choose for foreign relations positions, the Supreme Court, and other posts. We need unity more than ever. Congressional leaders, some of whom are also running for office, need to drop their “attitudes” and do what’s best for the citizens. So vote this November. And encourage others to vote as well. Your children depend on it. It’s true!!!!!