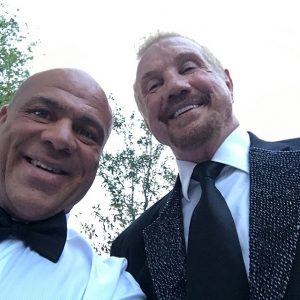 I honestly had the time of my life at Wrestlemania Week. It was nice to see some old and some new faces. The business has changed quite a bit, but in many ways that’s a good thing. The athletes are healthier and more vigorous.

My induction into the WWE Hall of Fame was my favorite moment. I loved talking about my history and giving advice to the young sports entertainers, not to mention drowning myself in milk, LOL. I’ve always enjoyed making an impression on others and I hope that I accomplished that during the Hall of Fame event.

Why did I want to return to WWE so badly, even if it was just for the HOF moment? It was because of the fans, the WWE Universe. I wanted the chance to stand on the WWE platform and give my sincere “thank yous” to a generation of fans who did so much for me. Whether you loved me or hated me, it was important to me that I was appreciated, and I hope that everyone was feeling that.

The other reason I wanted to return to WWE is so my little ones could see me up on the WWE platform, just once. My oldest child Kyra witnessed it before, but Kody, Giuliana, Sophia and Nikoletta did not. It was important to me that ALL of my 5 children could know who their father was, and what kind of impact he made in the business, even though my youngest, Nikoletta, is only 5 months old. Even though she won’t remember, she was there.

So thank you to all of the fans who I have entertained over the years. Thank you for sharing these moments with me. I had the time of my life. Oh it’s true. It’s damn true!!