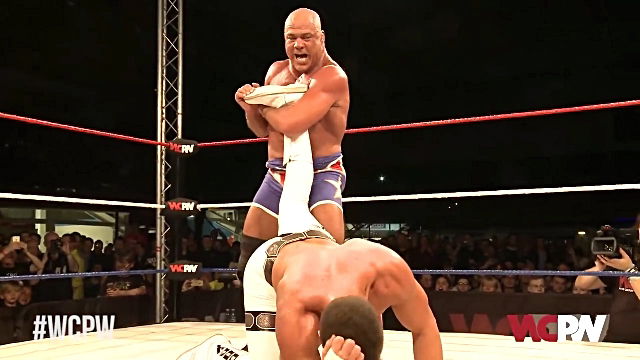 If anyone would have asked me 2 years ago if I would wrestle at independent shows this past year, I would have said absolutely not. BUT I couldn’t resist. The Indy shows I’ve attended had some of the most passionate fans. URShow, which is a live stream company wasn’t an Indy but it may as well have been. It had that Indy feel and it gave me another opportunity to wrestle the Great Rey Mysterio. I Love wrestling Rey. It’s always a challenge.

That URShow match kicked off a slew of matches for me in 2016-17. The other companies I participated with were NEW Wrestling, WCPW and ICW. I love the relaxed feel and improv type structure of Indy shows. They are very easy, but my “Indy tour for 2016-17” continued with some incredible talent and matches. Half were with former WWE talent, with the likes of Cody Rhodes (3 matches with him) and Del Rio, both after Rey Mysterio. But then I wanted to challenge myself with younger, less experienced talent who I believe will have incredible futures. Zack Saber Jr, Joe Hendry and Joe Coffey, all from the U.K., were so much fun to work with, and very challenging for me. Why did I really do it? Honestly? I wanted to show that I could “go” with anyone in the world at my ripe old age of 48. Each match was different, and it enabled me to learn how to adapt to younger, more energetic wrestlers.

What was my record against these guys? Who cares!! 4-4, to be exact, not that impressive. But I never based my career on winning. At least not my pro career. It was about having quality matches with all different styles throughout the world. I learned a lot about wrestling today, and I learned that I can go head-to-head with just about anyone.

Indies are in a “hot phase” right now. Indy fans love and appreciate great talent. They will never be compared to what is the monster, the WWE, but the Indies are quite satisfying. I learned that I am still in my prime and can go with anyone in the world. But can I go night in and night out consistently? No. I would not even attempt it. But I know that I can wrestle at least once or twice a week, and I’m okay with that.

The one thing I have promised myself is to never be a shell of myself. If I can’t have the “Kurt Angle Style Matches” that fans expect from me, I will retire. Until then, I will continue to wrestle. But I will not continue at Indy events. I proved I could do it and I’m ok with that. So what’s next? We will see. That’s all I can say right now. But I want to thank every single fan that came to see me perform. I’m so very grateful. And THAT is true!!!!!