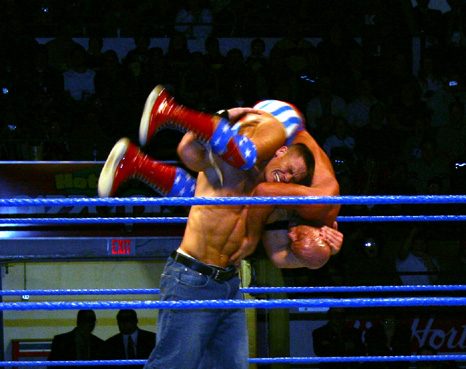 Many fans have read my thoughts on why John Cena is the GOAT in WWE, dating back to the Attitude Era. Some liked that comment, some didn’t. But let me lay out why I think he is.

John Cena has been on top for 14 years. He’s been the “go to” guy for that long. Is he the best technical wrestler ever? No. Not even close. But what he’s been able to accomplish is unparalleled. The fact is, John Cena has consistently stayed healthy and stayed “out of trouble” for his entire career. Are there better wrestlers who have tied or even come close to his accomplishments? Yes. Ric Flair. HHH. Hogan. Undertaker. Orton. Is Ric Flair a better wrestler? Of course. So is Bret Hart and Shawn Michaels and Stone Cold and HHH and Undertaker and, yes, even yours truly. But none of us were able to stay on top as the marquee guy for as long as Cena.

Cena came into the company and became THE top guy from almost Day 1. Is it because he was marketable? Yes! He sells millions of dollars of merchandise each year. Has he sold as much as Stone Cold or The Rock did in their prime? Probably not. But was either Austin or The Rock main-eventing for 14 years straight? Unfortunately, no. I myself only went 7 years, and 2 of those years I was out with injury. I don’t believe Cena is the greatest “wrestler” of all time. Flair, Hart, Michaels, Austin, HHH, Undertaker and even myself might be able to stake that claim. But there are so many things that go into being WWE’s greatest ever. It’s not just the wrestling, it’s marketability. And add to that how much Cena has done for charity and kids, which is also unparalleled.

Take into consideration all of the things I mentioned, and how could you not put Cena at the top of the list?? Ric Flair has also won 16 world titles, but some were in other companies. Cena has won 16 in WWE only. HHH is 2nd with 14. Orton is 3rd with 11 or 12, I believe. Some of you may agree and some of you will disagree with me, but the facts are the facts. It’s damn true.