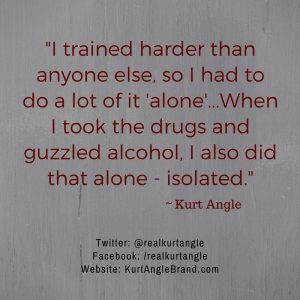 For over 10 years, I allowed myself to become out of control, mentally and physically. I was pushing myself beyond my capabilities. I broke my neck several times and used painkillers to hide my pain. I was broken, in many ways.

The only thing that did not suffer was my performance inside the wrestling ring. But I lost my relationships with others, my health, and the reputation that I had worked so hard for 30 years to create. In that darkest moment, I met my wife Giovanna. I had never had a healthy relationship with anyone else before, and Giovanna was my first “true love” who made me realize how important it is to have a meaningful bond with someone else. The only other person I truly had that with was my mother. My life started to lean toward family over my career. My career had always come first in my life, outside of my relationship with God.

My wife turned my story of denial around. During that difficult decade, my first priority every morning was making sure I had enough pills and alcohol to get me through the day. It literally consumed my life. I was a prisoner to the drugs (I would have been reduced to heroin if I hadn’t had the money to pay for the pricey painkillers). Being an addict definitely affects your choices, and I made some doozies. I lost a substantial amount of my savings on bad investments, and then got my fourth DUI in five years. My wife finally confronted me and told me I had a choice to make. Her and the kids, or drugs and alcohol. I was about to lose the most important person in my life. So I went to rehab. I didn’t want to quit taking drugs but I knew I had to give it a shot if I wanted to keep my family in my life.

I was always in my own little world growing up. I trained harder than anyone else, so I had to do a lot of it “alone”. Being a loner was my biggest asset because of my drive. When I took the drugs and guzzled alcohol, I also did that alone – isolated. But I was in my 40s by then and I realized I didn’t want to live the rest of my life alone. I saw a whole new life for myself, with my wife and children. My father was a good man but he isolated himself family and was a prisoner to alcohol. He worked hard and paid the bills, but he preferred to drink and pass out over spending time with us. That’s how his dad raised him, and that’s all he knew, and I became the same man. I also worked hard and provided for my family and I thought that was all I needed to give them. Boy, I was dead wrong.

I am now a very happy man. I have a wife and 5 wonderful kids. I chose love over lust for drugs. Am I one of the lucky ones? Yes. But I know that if I did it anybody can do it. Overcoming your demons isn’t easy but it’s attainable. The first step is getting over denial, and it’s scary. My hope is that many lives are saved because I was humble enough to tell my story. If you know anyone struggling with the disease of addiction, I’m willing to help them. Go to ANGLESTRONG.com

Be sure to watch my story “Kurt Angle Homecoming 24” on the WWE Network.

Any cookies that may not be particularly necessary for the website to function and is used specifically to collect user personal data via analytics, ads, other embedded contents are termed as non-necessary cookies. It is mandatory to procure user consent prior to running these cookies on your website.

SAVE & ACCEPT
Scroll to Top