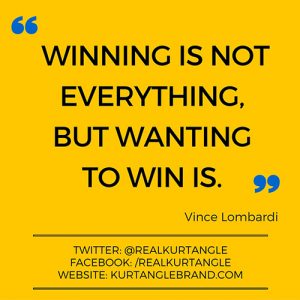 As a parent, one of the things that I expect from my children, is that they will always give their very best. In the classroom, on the playing field, and as a member of society.

My name is Kurt Angle and I’m a champion. How did I become the very best? Well…it’s no secret, it was my family. I grew up the youngest of 6 kids. Sports were a huge part of life in my family and we talked about it all of the time. My dad was a football player in the Army. Football was our first love and we all were incredible players. Then, my brother Mark got into trouble in high school. It seemed he enjoyed beating people up more than anything, and if you grew up in Pittsburgh, you’ve heard of his fighting legacy. That same legacy landed him in a juvenile detention center for almost 2 years. Mark was a real badass with some anger issues, and although Mark followed my oldest brother David’s passion for football, he fell in love with wrestling after he got out of “Juvy”. The wrestling coach said to Mark, “Welcome to wrestling. We are going to turn that rage you have into something positive, a wrestling champion”. And soon, he was. (Mark has used that athletic work ethic to have a highly successful career as a business agent in the Boilermakers today.) The rest of us joined him in his love for wrestling. Johnny was next, Le’Anne became a wrestling cheerleader (although she could grapple very well herself and would have given Ronda Rousey a run for her money today!), then my brother Eric. Eric landed himself a wrestling scholarship to Waynesburg University because of his success. Then came yours truly. What made me excel more than the others? Well, where do I start? I was the youngest. The youngest ALWAYS has higher expectations because my older siblings gave me something to shoot for. I wanted to be even better than them. How did I do it??? Failure. Getting my ass kicked by my brothers. It lit a spark under me like you wouldn’t believe. And, the fact that Eric was ALWAYS just a little bit better than I was, killed me inside, but it gave me something to aim for. My mindset was “just be better than Eric”, no matter how hard I had to work. When you keep fighting for something that leaves you hollow inside, like something is missing, you can do 2 things….quit, or work even harder to attain it. By my senior year in high school, I could finally say that I was better than Eric.

You can’t make your way to the very top by always winning or having success. None of us wanted to be in 2nd place, but we were many times. It was our desire to excel that separated us from the rest. You need to accept losing and build on it. If my brother Eric wasn’t just a tad better than me, I would have never had that desire to be the best in the world. Getting your ass handed to you is a good thing, if you can spin it into a positive attitude and a desire to be better than the one kicking your ass.

So fail. Fail graciously… lose, lose again, but don’t quit! I promise that something good will come out of it. At best, you become a champion…at the very least you have a work ethic 2nd to none and you can spin it into a successful career. Create a champion by taking lumps. It can even happen to you. And THAT is damn true!!!